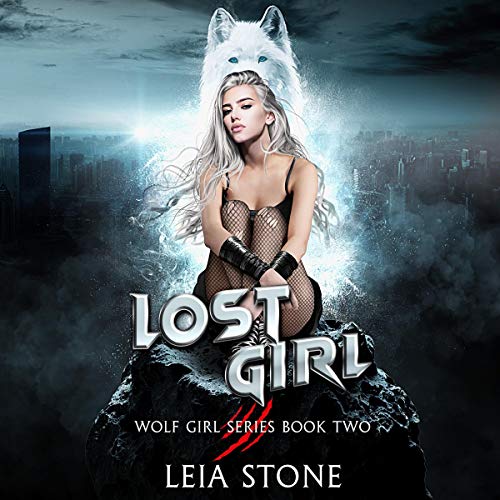 I've been kidnapped by vampires and Sawyer is under some love spell.

Now I’ve got to traipse through the entire Magic Lands without getting killed to make it back to Werewolf City...hopefully in one piece.

Everything would have worked out as planned if Sawyer hadn’t gone on another revenge killing spree in my honor.

Now the entire magical world is at war, and my True Mate and I are stuck in the middle of it.

It's just another Monday.

Demi`s and Sawyer's roller coaster ride in terms of love, trust and pack (building) is nerve-wracking and exciting.
Fantasy romance fans will love this (4) book series! The books build on each other, so it makes sense to read the books one after the other.
Demi's personal development from a simple wolf girl, who grew up in exile, to the alpha she-wolf is absolutely worth reading.
Leia Stone's writing style is captivating and addicting.
Lesen Sie weiter
Eine Person fand diese Informationen hilfreich
Nützlich
Missbrauch melden
Rezensionen auf Deutsch übersetzen

Little M
3,0 von 5 Sternen It was good
Kundenrezension aus Deutschland 🇩🇪 am 2. April 2022
Yes. It was good. I loved how Demi and Sawyer found their way back to each other after Demi got kidnapped. How he proposed and how he tried to be just perfect.

What I didn't like was how just Sawyer was made responsible for how the first book ended. Yes, Sawyer publicly chose Meredith to be his wife but DEMI KISSED ANOTHER GUY. I mean, come on... Of course his actions were worse but she kept reminding him about his betrayal. Always wondering. While she never once apologized for kissing someone else.. And he begged her on his knees..

And then, when the Wild Wolves told Demi that they would lose their magic without her being their alpha, she just ignored them. What was that all about?? She just cared about them when she needed them. Not when they needed her.
Yes there's that curse issue but come on...

Don't get me wrong, I liked the story, I liked the plot. I loved how there are no other love interests as there soo often are. But I can't understand how Demi thinks or why she acts as she does. Still, want to see how the story continues.
Lesen Sie weiter
Nützlich
Missbrauch melden
Rezensionen auf Deutsch übersetzen

Ricarda Baaske
3,0 von 5 Sternen What now!?
Kundenrezension aus Deutschland 🇩🇪 am 27. Februar 2021
I haven‘t decided yet if I like this book or not. Had high expectations since the first book was spectacular. But those expectations weren’t met. It feels like the book ended before it really startet, like a bridgeover to the third book.
Lesen Sie weiter
Nützlich
Missbrauch melden
Rezensionen auf Deutsch übersetzen

Just Josie
2,0 von 5 Sternen 🔘Lost girl in more ways than one🔘
Kundenrezension aus Deutschland 🇩🇪 am 26. Februar 2021
I am over here feeling completely bummed out.

💎💎The coolest thing about this book was the bejewelled sneakers. 💎💎

I have been so excited about this book. Did I love the first? No. But it still had the power to draw me in. (I even pre-ordered, and this girl rarely does that!) And I wanted to know what happened so badly, because the first cliffhanger lay the grounds to some heavy drama and hurt.
And that’s my late night snack.
Which were completely and utterly ignored. I feel cheated😭

Stone does not lack imagination and yet I can’t put my finger on the exact “issue” I have with how the story went, or how the world building is.
Something just seems “off”. Maybe I get to little info? Maybe I am just not buying it? Maybe I just need things better explained🤔

Not to mention I just can’t with these characters.
I can’t get my head around Sawyer being such a good alpha when he runs head first into things and starts killing. I actually will go so far to find him whiny. I don’t see him “being in control” or “being strategic”, or even being “alpha”. I just see him lash out and scream at Demi to forgive him.
Like what?
And Demi? Why wasn’t she FURIOUS! Oh no, she was busy passing out all book, that’s right. Ok, that was low. Sorry. 😫 But didn’t she just pass out so much? I got super annoyed by it. Yes, yes, she was hurt a lot, but why keep ending scenes that way. It seems is little “easy”. Okay, I just found out what my issue with it was. It was repetitive. That’s right, I nailed it. Boom.

Another big trigger for me was how their bond could keep being repressed, BY OTHERS. Will someone explain to me how this works? Does the bond only work when there is wifi? I seriously want to know. 😱
Oh, and if the wolves in Wolf City were so powerful and respected why do they keep being surprise attacked?
I have so many questions😭

Why did she go “back to school”, when a WAR was brewing?
Why?
Just why?😫😫😫
Lesen Sie weiter
3 Personen fanden diese Informationen hilfreich
Nützlich
Missbrauch melden
Rezensionen auf Deutsch übersetzen
Alle Rezensionen anzeigen

Cheryl
5,0 von 5 Sternen I knew this book would floor me yet again!!!
Kundenrezension aus Großbritannien 🇬🇧 am 27. Februar 2021
Verifizierter Kauf
Omg what a powerful book this is. Each page packs a great punch to leave you feeling everything that Demi goes through. As she fights to get back to wolf lands, by travelling through dangerous territories.
With twist after twist we come to such a cliffhanger ending that will blow you away, and leave you yet again feeling so many crazy things.
I honestly can't wait for book three I really need to know what happens next and will they all survive war. I just hope my head and heart can take it. Wow just wow
Lesen Sie weiter
2 Personen fanden diese Informationen hilfreich
Missbrauch melden
Rezensionen auf Deutsch übersetzen

Sara Oxo
5,0 von 5 Sternen A Fangtastic five-star read
Kundenrezension aus Großbritannien 🇬🇧 am 22. April 2022
Verifizierter Kauf
A Fangtastic five-star read. This is number two in the Wolf Girl series and it’s just been a roller-coaster, I read number one, then dropped the ball, picked this up a couple of days ago and have now read two, three and four over the last couple of days, I haven’t been able to put them down. The twists and turns will keep you hooked and to be honest Demi and Sawyer will just break you as they are kept apart. The way they fight for their love is just sublime and shows you just how strong young love can be. This was a sublime story that brings us new characters to love and cherish like Marmal who fast became someone I couldn’t wait to hear more about.
Lesen Sie weiter
Missbrauch melden
Rezensionen auf Deutsch übersetzen

K e crofts
5,0 von 5 Sternen Wow
Kundenrezension aus Großbritannien 🇬🇧 am 27. Februar 2021
Verifizierter Kauf
Well you did it.....you have us something to look forward to during lockdown.this was a great sequel to wolf girl. The book flowed beautifully I was constantly on the edge of my seat during the escape, and totally swooning during the reunion....didn't think I could be anymore in love with Sawyer. Well done Leia stone you certainly are a great story teller x x bravo
Lesen Sie weiter
2 Personen fanden diese Informationen hilfreich
Missbrauch melden
Rezensionen auf Deutsch übersetzen

Amy L
5,0 von 5 Sternen The drama !!!
Kundenrezension aus Großbritannien 🇬🇧 am 26. Februar 2021
Verifizierter Kauf
Wow! This book just took the drama up to infinity, the next book in Demi and Sawyers journey and it did not disappoint! I’ve just finished reading the book in one sitting and still trying to process everything that happened because my jaw is currently still on the floor but all I will say is you need to read this series you will not be disappointed!!
Lesen Sie weiter
2 Personen fanden diese Informationen hilfreich
Missbrauch melden
Rezensionen auf Deutsch übersetzen
Alle Rezensionen anzeigen