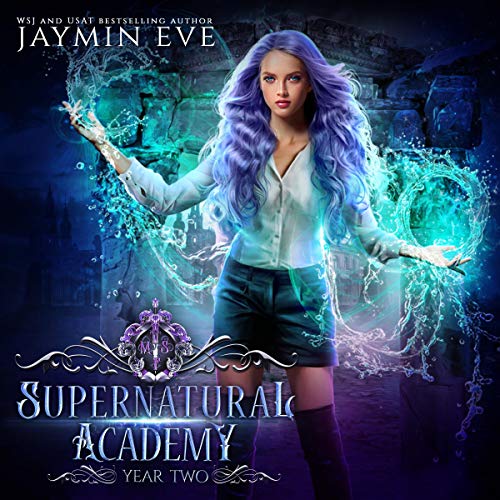 Year two at the Academy! The year of purple.

Maddison James learned a lot about life last year. Only important stuff, of course. Like how to breathe under water, how to turn an arrow into a weapon, and how to fall in love.

Now, it's just time for them to live happily ever after.

Only the gods have different plans. And with Atlantis rising, Maddi isn't sure she'll survive long enough to even finish her second year, let alone have any sort of future.

Even worse, the sadistic Atlantean gods want to break her before they kill her. But Maddi has been underestimated before, and she has hidden strengths they'll never see coming.

Year of purple...bring it on.

This is book two in the Supernatural Academy series. Full-length at 105k words.

Jz
5,0 von 5 Sternen Year of the Purple
Überprüft in Großbritannien 🇬🇧 am 27. September 2019
Verifizierter Kauf
What another rollercoaster journey this author has taken me on with this read. This is book 2 in the Supernatural Academy series which is part of the same world as the Supernatural Prison series (my favourite series by this author) and I'm so happy to say that we get some more of my favourite characters from that series making a guest appearance (I think I may of squee'd out loud at that part). Maddi goes through many ups and downs in this book and there were some moments that made me gasp. Asher is still hot, Hot, HOT as are the rest of the Atlanteans. I enjoyed Year Two and give it five stars. Now hurry up the year of the Aqua as I can't wait to read what happens next!
Lesen Sie weiter
Eine Person fand diese Informationen hilfreich
Missbrauch melden
Rezensionen auf Deutsch übersetzen

Diana Kitteh
5,0 von 5 Sternen Brilliant!
Überprüft in Großbritannien 🇬🇧 am 31. Oktober 2019
Verifizierter Kauf
I am hooked! Never a dull moment, the language used just flows naturally with the characters' personality and you just can't put the book down...I know, because waking up the past couple of mornings has not been easy.

Full of action, love, sex, smartass comebacks and sexy gods, you can't not fall in love with the entire story. This is not a book that you can guess the ending of because there's always something that happens that just keeps you on the edge of your seat/bed/floor or wherever else you might end up reading this. I can't wait for the 3rd Year book to come out so I can have another couple of late nights.

Frani
5,0 von 5 Sternen Emotional rollercoaster 💜💜💜💜💜
Überprüft in Großbritannien 🇬🇧 am 26. September 2019
Verifizierter Kauf
Well omg ! I wanted to throw my kindle at the wall and give in......... BUT I didn't that was the biggest rollercoaster ride of emotions ive been through in a long time but my god it was worth it, you drew me in ripped my heart out stomped on it then stuck it back in with sticky tape and finally made it beat again after a while, i LOVED this book i loved seeing Braxton and jessa and Tyson and I screamed at louis's news I cannot wait for book 3 yet the year of aqua loose and let's kick some gods where it hurts !!
Lesen Sie weiter
Missbrauch melden
Rezensionen auf Deutsch übersetzen

Kindle Customer
5,0 von 5 Sternen Omg!
Überprüft in Großbritannien 🇬🇧 am 25. September 2019
Verifizierter Kauf
I could not put the book down!
I cried, laughed & cried some more reading this but wouldn't have it any other way. I loved how characters from Jaymin 's other books are included in the story too.
Like her other books, you really connect with everyone & feel like you are living the story too, love it!!
Thank you Jaymin, keep up the amazing work.
Recommend to everyone as a must read & you'll be hooked!
Lesen Sie weiter
Missbrauch melden
Rezensionen auf Deutsch übersetzen

Emma Bennett
5,0 von 5 Sternen Wow
Überprüft in Großbritannien 🇬🇧 am 29. Juli 2021
Verifizierter Kauf
I love this series so far and can't wait to read more I'm powering through these books so fast I can't put them down I love the strength of the characters and even the roller coasters of emotions from this book I'm still left wanting more!!
Lesen Sie weiter
Missbrauch melden
Rezensionen auf Deutsch übersetzen
Alle Rezensionen anzeigen