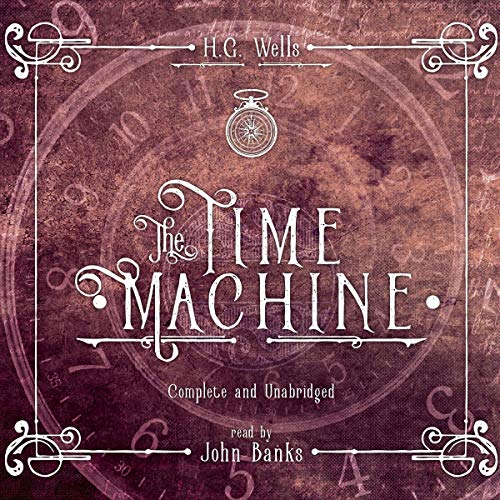 When a Victorian scientist propels himself into the year 802,701 AD, he is initially delighted to find that suffering has been replaced by beauty, contentment and peace. Entranced at first by the Eloi, an elfin species descended from man, he soon realises that this beautiful people are simply remnants of a once-great culture - now weak and childishly afraid of the dark. But they have every reason to be afraid: in deep tunnels beneath their paradise lurks another race descended from humanity - the sinister Morlocks. And when the scientist's time machine vanishes, it becomes clear he must search these tunnels, if he is ever to return to his own era.

About the Narrator: John Banks is one of the UK's most prolific audiobook narrators, working for the likes of Big Finish, Audible, Random House and Games Workshop. He is a true multi-voice, creating everything from monsters to marauding aliens. He is also an accomplished stage and TV actor.

About the Author: Herbert George Wells was a novelist, teacher, historian and journalist, who has become known as the "father of science fiction." His works have been adapted countless times, and provided the basis for many literary and theatrical productions.

BücherFen
4,0 von 5 Sternen The Time Machine = Mother of all timetravel-stories
Kundenrezension aus Deutschland 🇩🇪 am 17. Mai 2017
Verifizierter Kauf
At least once a year a (classic) novel in English. That's my personal goal and this year I chose H. G. Wells' "The Time Machine".
I love time-travelling stories (yeah, I admit, I am a Whovian) and therefore "The Time Machine" is kind of must-read, because it is the first time in literature that time-travelling (using a machine) is described.
Considering that this story has been published in 1895 it is an amazing scenario Mr. Wells paints in his novel.

The story is narrated by the timetraveler himself. The reader "plays" the role of a dinner-party participant listening to the nameless man, who is also the host of the evening.

During the first evening our narrator discusses with educated men (scientist, psychologist, journalist etc) the possibility of timetravelling and shows them his invention: the time machine.
(The description is so good, you could imagine standing it in your living room, inviting you for a ride... and you would instinctively know how to use ist)
Of course he has to face mocking and doubts. The guests leave the party and return the other evening during which their hosts tell them the story of his first trip into the future, his landing in the year 802.701, about meeting the childish, naiv Eloi and the creepy Morlocks.
What this story is about I won't tell, because if you want to know, you have to read the story yourself ;-)
Will you believe him? His guests did not, so he started a new ride into the future, but as far as we know never returned....

I enjoyed reading "The Time Machine". It is a reat piece of literature and the future H.G. Wells is painting gave me the chills, although I was not too deep into the characters (emotional).

So, if you are a friend of timetravelling, you should, no, you have to, read this novel (as it is the mother of all timetravel-stories).

dimmy
5,0 von 5 Sternen Excellent sewn hardback
Kundenrezension aus Deutschland 🇩🇪 am 15. April 2022
Verifizierter Kauf
This is a very nice edition. It has a sewn binding and bookcloth on its cover. The font is a bit small

The story is unabridged, unlike most of the books in this series (which is a shame since the format is very nice).

Amazon Customer
5,0 von 5 Sternen Great Classic
Kundenrezension aus Deutschland 🇩🇪 am 7. Januar 2021
Verifizierter Kauf
I have seen the original time machine movie serveral years ago and had to read this novella for my university exam. I was actually surprised that it was such a good read given that it was one of the first science fiction books. Also very cheap! Highly recommend it!
Lesen Sie weiter
Nützlich
Missbrauch melden
Rezensionen auf Deutsch übersetzen

Georg
5,0 von 5 Sternen A Classic
Kundenrezension aus Deutschland 🇩🇪 am 25. Mai 2019
Verifizierter Kauf
"The Time Machine" is a must read for everyone.
The author gives us a theoretical future for the human kind embracing the ideas of Charles Darwin.
His conclusions are logical and make sense.
It's really interesting!
Lesen Sie weiter
Nützlich
Missbrauch melden
Rezensionen auf Deutsch übersetzen

Rose Quartz Reads
5,0 von 5 Sternen A fantastic tale
Kundenrezension aus Großbritannien 🇬🇧 am 26. Februar 2018
Verifizierter Kauf
For a short story, The Time Machine was so memorable for me. It's about a man who calls himself a time traveller, who tells a group of friends about his what he saw in the very distant future for humanity. Early Science Fiction like this fascinates me, because the ideas people like Wells was writing about reads as though it was written much later than 1895. Wells' science is believable, and the future he depicts is something that I could have never imagined. There are parts of his commentary on the growth of the world that I agree with and parts that I do not, but all of it is a fascinating interpretation of what a man must have seen of his own Victorian society. Despite the book's slow start, it is thought provoking and adventurous, and I would recommend it even if you aren't a fan of the genre.

Ivan's choice
5,0 von 5 Sternen Very nuanced analysis on cultural context!
Kundenrezension aus Großbritannien 🇬🇧 am 27. Februar 2019
Verifizierter Kauf
My parcel has arrived 2 days early than forecast and I just could not wait to open it and read a new OUP edition of The Time Machine.
The editor has given a very succinct overview on the development of Wells, the writer, from his financial hardship to his later success as a world-historical figure in the early twentieth century. The editor pays special attention to those contemporary writers like Wells who did not come from upper-middle class to whom a classical education was more preferable than a science education. So, at the time, Wells and Haggard, for instance, were subtly slighted by "elitist" writers and critics.
What is so impressive about the introduction is the editor's nuanced analysis on degeneration, a topic that greatly concerns the Victorians. Evolution is not always about becoming better; there is a chance to degenerate. The editor has shown how contemporary writers in the last twenty years of Victorian period expressed their concerns for the gloomy future of humanity.
I also think the editor has greatly enriched the end-notes to the main text, which comes from the first UK edition though other editors use an earlier edition as copy text and emended errors one by one. As Prof Luckhurst says in Explanatory Notes, he has been also indebted to early work by S. Arata, P. Parrinder, ect. He has supplied some findings of his own to elucidate some terms. A wonderful job done!
The flow of ideas is smooth. But on page xxiv, a misplaced subject in a sentence "mis-represents" the intended meaning of his idea: As a science journalist, drama critic, etc, IT is surprising that Well's work... My guess is that the editor is referring to the author rather than the work and so it may be: As a science journalist, a drama critic, WELLS not surprisingly has produced a work that feels like an echo-box of many literary genres...
Very happy to see a renewed interest in Wells as reflected in the long list of books and articles on his works.
Lesen Sie weiter
3 Personen fanden diese Informationen hilfreich
Missbrauch melden
Rezensionen auf Deutsch übersetzen

S. Price
3,0 von 5 Sternen Disappointing edition of a classic
Kundenrezension aus Großbritannien 🇬🇧 am 14. Juli 2018
Verifizierter Kauf
The book itself is a classic and I'm not faulting it. This particular edition was a little disappointing having a rather brief and superficial introduction. Moreover, the "Classic literature: words and phrases" section at the end (which sounded like an excellent idea in principle) seemed utterly unrelated to the text. It included words such as shabby and smallpox (both referenced to Huckleberry Finn) but none of the more obscure words from Wells' story - etiolated? cicerone?

I also purchased a Wordsworth Classics edition of another of Wells' stories (actually a 2-in-1) and that includes a more substantial introduction, biography and (relevant!) end notes. I'd recommend you look out for those editions instead.
Lesen Sie weiter
9 Personen fanden diese Informationen hilfreich
Missbrauch melden
Rezensionen auf Deutsch übersetzen

John M
4,0 von 5 Sternen A groundbreaking SF classic
Kundenrezension aus Großbritannien 🇬🇧 am 21. Februar 2019
Verifizierter Kauf
I bought this as a second-hand book, at a lower price than offered for a new one but when it came it appears completely new and unread. So, the vendor provided value.
The book itself is a classic, there is no doubt. However, it is a short; only some 125 pages and at about 30,000 words is a novella rather than a novel.
The story involves a 'Time Traveller' who builds a time machine and explains to sceptical dinner party guests his travel forward by some eight hundred thousand or so years to a world where humankind has split into two races, the gentle Eloi living above ground and the subterranean dwelling Morlocks. The themes explore how human society and evolution may interact to create these two separate races. An interesting and no doubt radical and groundbreaking work of its time, however modern scientists may question the credibility.
There is a single short chapter towards the end where the Time Traveller goes forward to the end of the Earth as the sun dies - only some 30 million years hence, which is a much shorter time than modern science predicts.
Good to have read it, although inevitably dated.
Lesen Sie weiter
Missbrauch melden
Rezensionen auf Deutsch übersetzen

M. Dowden
5,0 von 5 Sternen Always A Good Read
Kundenrezension aus Großbritannien 🇬🇧 am 20. Februar 2016
Verifizierter Kauf
First published way back in 1895 this novella still has the power to really make us think about the future of mankind. Although time travel had come up in literature before I think H G Wells is the person credited for giving us the term time machine which has now become universal.

We never know the time traveller’s name as the narrator leaves out that tantalising detail. The story starts one evening with friends gathered around and they are told about and presented with a small model time machine, which is then made to disappear. Of course like us most of them believe this to be the work of sleight of hand. But as we read on and these people are gathered for a dinner and chat some time later, the time traveller bursts in on them, saying he has been forward in time.

And so we are taken millennia into the future where we are told of what was seen and experienced. Ending up in what was once London the area seems to be full of partially ruined buildings and the landscape is like a vast garden. There we are introduced to the Eloi, who are like us, but more diminutive and not really showing that much interest in the world around them, as well as being a bit simple. But as our intrepid explorer is about to find out, these are not the only people around, for there are the Morlocks who live underground.

As we read here the time traveller has certain theories on what has happened in the many centuries that have passed since his own and this fits in with Wells’ own politics and leanings, so this is very much a socialist idea with which the traveller forms his opinions. In all this is still a great story to read, and although I suspect most have already read it before at one time or another there will always be those who have never read it before, as well as many who would like to reacquaint themselves with this tale.
Lesen Sie weiter
3 Personen fanden diese Informationen hilfreich
Missbrauch melden
Rezensionen auf Deutsch übersetzen
Alle Rezensionen anzeigen